It is October 30th, and we are only one day away from the spookiest holiday of the year – Hallowen! It would seem that Vampires, Witches and black cats are all symbols for this holiday, which is perfect, because they are all evil and scary!…Right? Wrong. About the cats anyways… In our society black cats are still used as symbols of menace, and they have earned this stereotype from a long history of association with witches in the western world. However, this view is not shared worldwide and opinions towards black cats varies depending on your location! 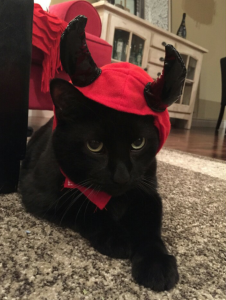 In the days of the witch hunts, black cats were often thought of as witches’ familiars. People believed that these creatures that could easily blend into the night, were spies that could relay information to witches – or that they were witches themselves with the power to change from one form to another. People believed this so strongly, that women who were friendly with, or especially if they owned a black cat were assumed to be a witch, and were prosecuted.

However this is mostly a western view point, and the theories surrounding black cats vary throughout the world, as well as throughout history! One of the earliest civilizations to recognize cats as symbols of good luck and fortune were the Egyptians. They believed that keeping a black cat in their home would earn them good favor with the goddess Bastet (or Bast). Bastet was a woman with the head of a cat, and was the goddess of protection, joy, dance music and love.

Cats have continued as symbols of good luck throughout history, and are still represented this way today in some cultures. In the UK, and in Japan black cats are considered good luck, and thought to bring prosperity! And in Yorkshire it is believed to be good luck to own a black cat, but bad luck if one crosses your path (and if one does, you should either choose to go in a different direction, or continue to cross paths with the cat while holding a button between your fingers). 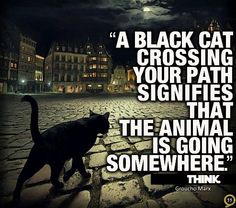 Sailors also thought of black cats as good luck and would often travel with one on board. Fisherman’s and Sailor’s wives would also keep black cats as pets in their homes in an attempt to use their influence to protect their husbands at sea. If a strange black cat walked on to the ship it was a good omen, however if the cat then turned around and walked back off of the ship – then the ship was “destined to sink”!

Whether they can predict the outcome of your voyage, or even the outcome of your day black cats are important symbols to people around the world. More often than not they are considered to be luck bearing critters and symbols of good fortune. As to the validity of these superstitions, I can only speak from my personal experience – I have owned a black cat for the past three years, and have never felt more lucky! I absolutely love him and his handsome little face, and could not imagine how anyone could think he was anything other than perfection! 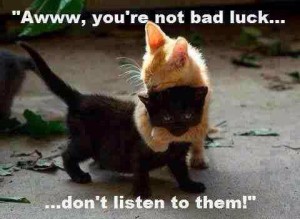 A History of Black Cats – the good. the bad. the thoughtfully creative.