The story of how cats took over my life… and I loved it!

Ever since I can remember, I have been an animal fanatic, with a particular passion for all things furry! Throughout my life I have had numerous pets including dogs, fish, fire bellied newts, and rats – and though I truly loved all animals I considered myself a dog person. It wasn’t until my mid-twenties when cats really entered my life and changed my whole perspective. I was quickly transformed from my former self; an average young woman with a healthy passion for animals and wildlife, into a full-fledged, full-hearted crazy cat lady.

When I graduated from university I started working at the Humane Society as an animal care attendant, and this is where I was plunged into the world of cats… and there was no turning back. Previous to my experience at the Humane Society, I had been biased by the mainstream stereotypes and misconceptions about cats. I believed they were pleasant animals, but that they were generally moody, often aggressive (especially if pet in the wrong spot!), and too independent to make loyal, loveable pets. As I started to work with dozens of cats on a daily basis, I quickly learned how wrong those stereotypes were! My eyes had been opened and I realized that a vast majority of cats are incredibly friendly, affectionate and while they are more independent than dogs, they still crave attention. I now see their independence as a bonus, because not only does it make them such easy pets to care for, but it also allows them to develop their own personalities and quirks!

At work one day, there was a new arrival, and he was a very large black cat. I slowly reached into his kennel to say hello and when he did not budge in the slightest to give me a “hello” sniff , and instead, sat in the back corner staring me down– I had to assume he could potentially be aggressive. To be safe I took a towel and put this cat into a “Kitty Burrito” to take him out of the kennel. When he again made no attempt to move at all as I slide him out, I realized he was not aggressive at all, but instead frozen with fear. I felt awful for my previous judgment of this kitty and spent some time cuddling him to try and break him out of his shell – which did not work. Throughout the week I noticed this cat was not eating, and each morning I would crack a can of the most delicious flavored wet food to try and entice him, and found myself giving him special privileges while I was cleaning which ever area of the facility he was being held in. He was still shy, but with time became affectionate and loved to follow me around the room, never straying too far. I didn’t realize it at the time, but this kitty had very effectively worked his way into my heart. When he finally made it to the adoption floor (he had been named Black Jack), I would go in and see him in the morning and he was always hiding at the back of his cage. Although he was still scared, a little TLC each day would break him out of his shell, and he would get up, come to the front of the cage, and give head bumps. 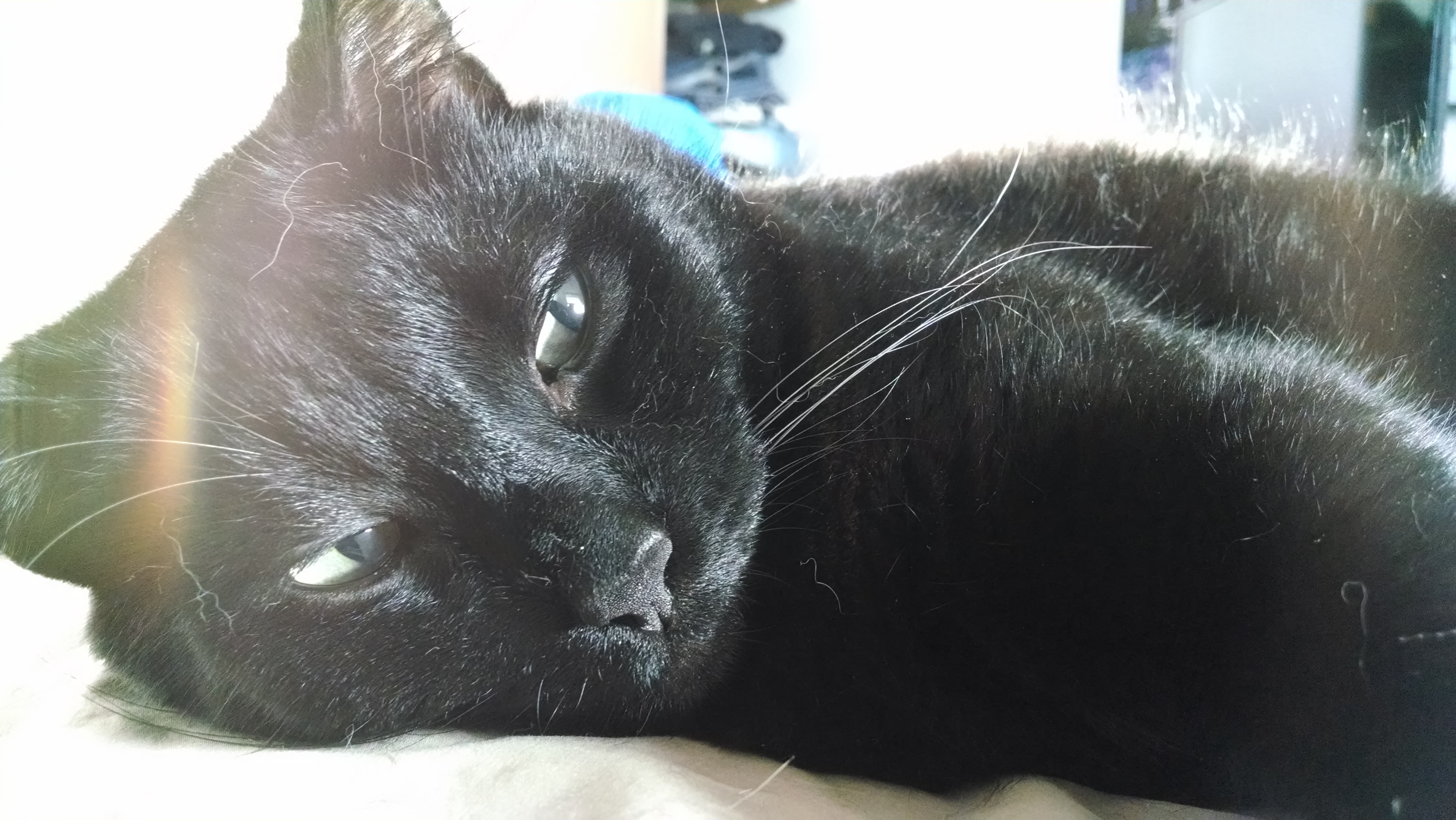 I had been trying to convince my boyfriend, Andrew, for at least a year that we should get a pet, but he was not a cat person himself, and was not overly open to the idea. On our day off, I very innocently suggested he stop into the shelter with me just so that he could meet some of the kitties I worked with on a regular basis; and of course I introduced him to Black Jack! Black Jack put his best paw forward when he met Andrew, and was not too introverted, but instead, was friendly, affectionate, and curled into a ball on my lap to show how cuddly he was. Andrew was a little shocked, being weighed down by the same stereotypes about cats that had previously affected me, and was starting to think that maybe cats weren’t so bad after all. That’s when I saw my opportunity… and I pounced! I bombarded Andrew with stories of how sweet Black Jack was, and constantly made him look at pictures I had taken of this handsome kitty at work until he cracked. He gave the okay, I went into the shelter, submitted the paperwork, and brought Black Jack home (where he was renamed Kona… Part of Andrew’s compromise to getting a cat was that its name had to be coffee related…This man drives a hard bargain.). 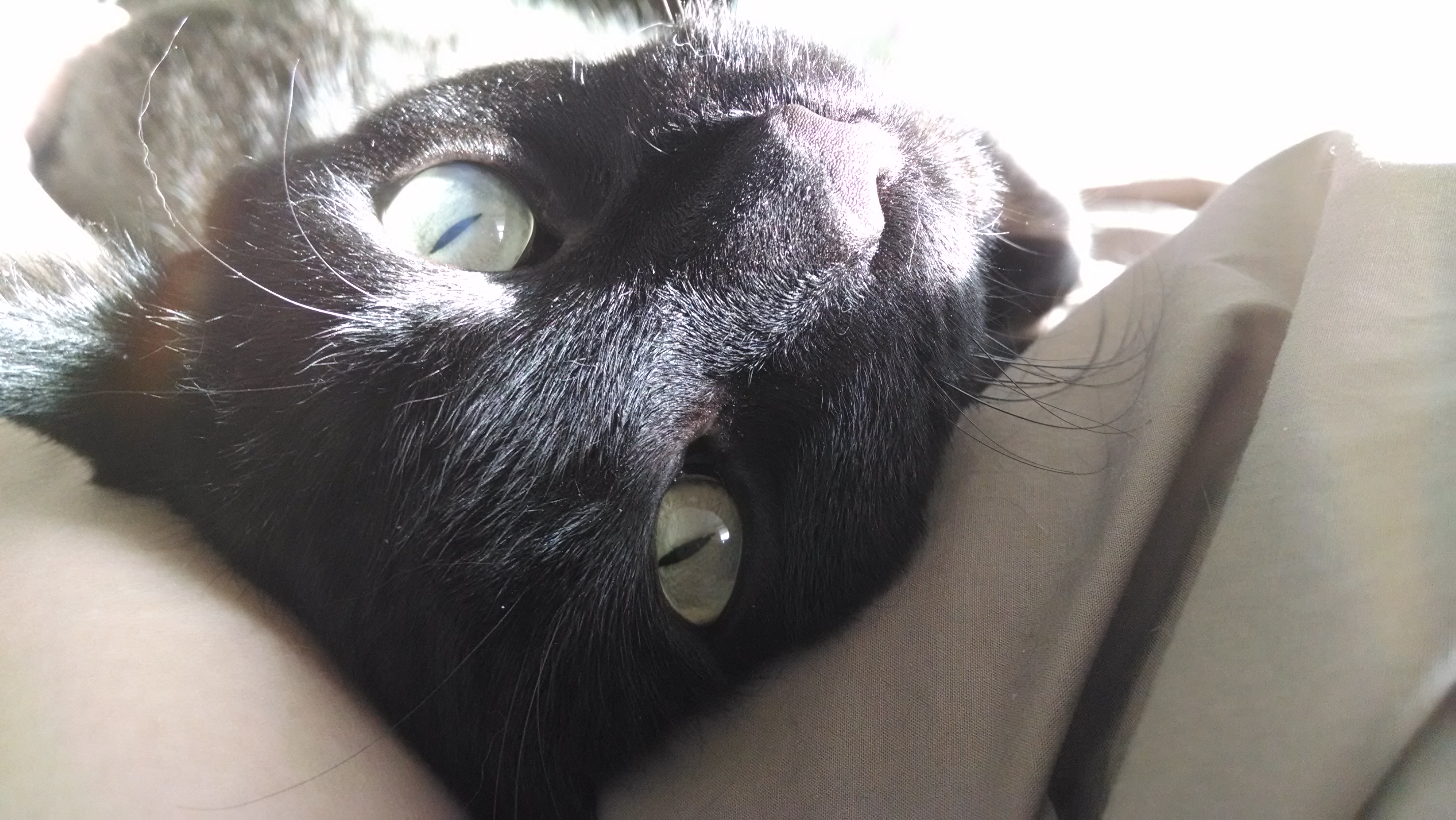 Once Andrew spent some time with Kona, and realized how sweet, not moody, and clean of a pet the cat was, he was converted. And it was settled, from then on, we would be cat people.

I currently work at the Cats’ Castle cat hotel, which is the dream job for a self-proclaimed crazy cat lady. Here, we are a boarding facility, looking after peoples beloved kitties while they are away on vacation, or off on business, or whatever else may keep them away from home. My love for cats has only grown stronger here, and I love that my days are filled with cats galore (we average 30-40 cats during our slow seasons here at the castle), all willing to snuggle and play.

Every now and then, we will get customers planning to rehome their kitties and would like to board them in the interim. This was the case with two cats Dave and Dexter. Dave was a boisterous young male who loved exploring, playing, and well, just being mischievous! His brother Dexter was a little more mature, he loved to snuggle and when you picked him up he would hold on to you so tightly his little fingers almost wrapped around your arm – and with a little TLC, Dexter would begin to drool (too adorable.). When it was looking like we might have a place for Dave, but not for Dexter, I was a little devastated for this snuggle bug. Seeing as Dexter had already salivated his way into my heart, I put on my best puppy dog face (please pardon the expression!) and went straight to Andrew. It took a little convincing, but slowly he opened up to the idea of a second cat. I brought Dexter home with me, and over the course of a week slowly started to introduce him to Kona. Within a week and a half the two kitties were not best buds, but they tolerated each other. But it didn’t take long for the pair to warm up to one another. 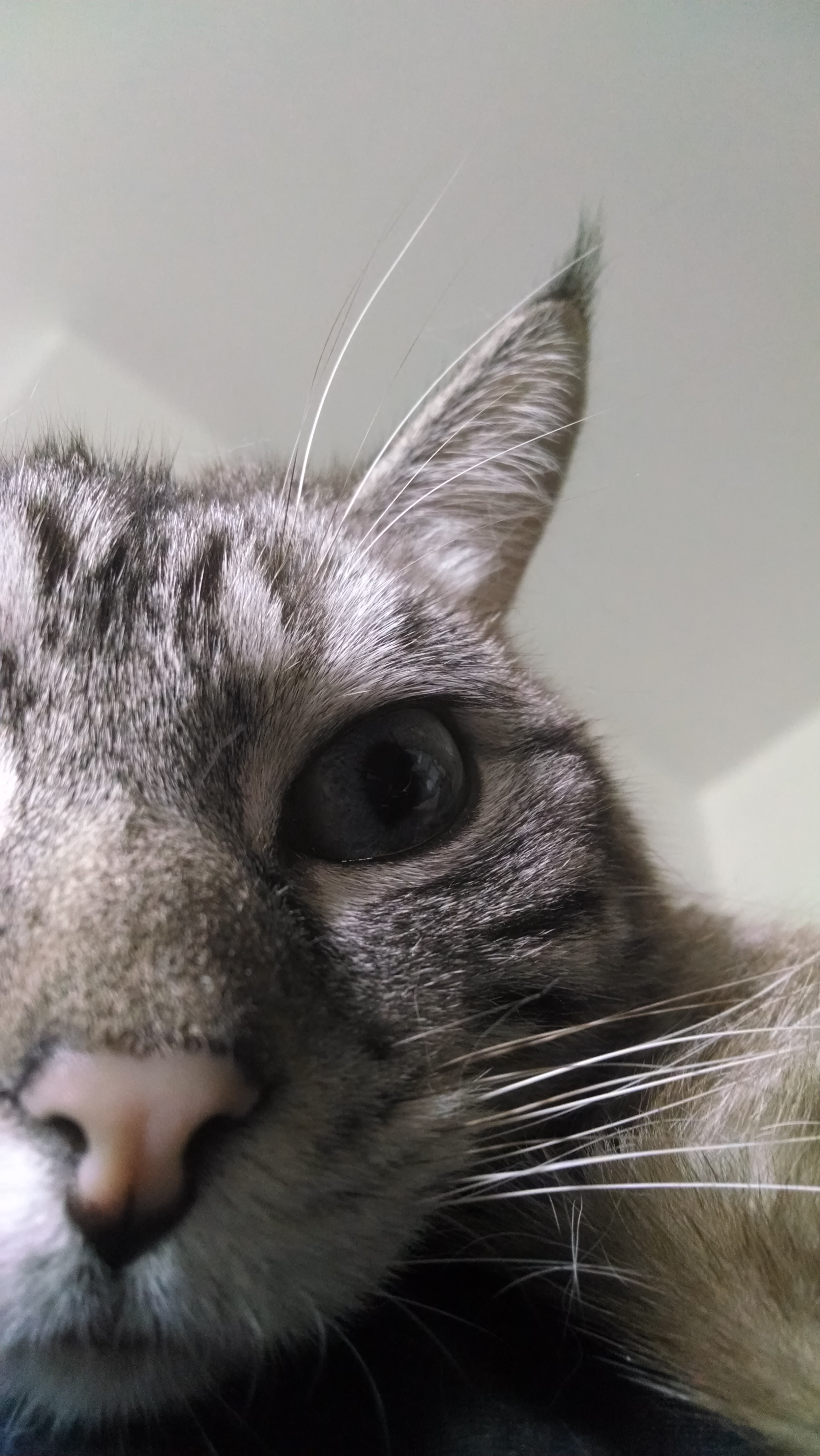 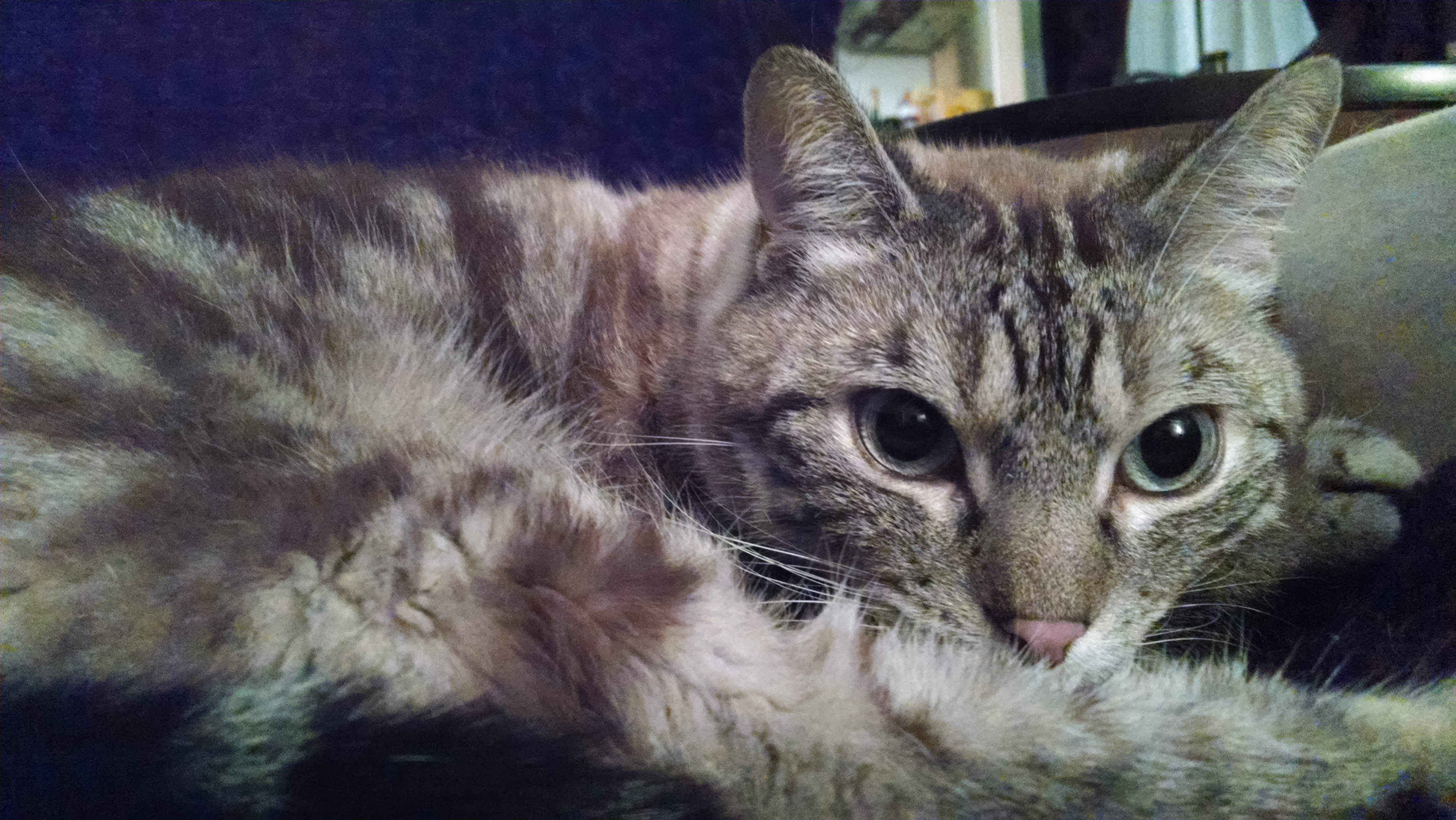 It has been almost a year since we brought Dexter home, and everything is going great! Kona and Dexter play with one another, they cuddle and groom one another (although Kona is a little more into it than Dexter is), and they are great lap cats! Andrew and I just adore our little fur babies (but don’t tell him I called them that!). I am one hundred percent one of those moms that follows the “kids” around the house, showering them with kisses and “I love you”s, and bombarding my friends with adorable photos of my Kona and Dexter <3… Dexter will tolerate the affection, but Kona LIVES for it! While neither Andrew or myself started out as cat lovers, we have seen the light. We are both converted, and feel our cats make our family a family, and our lives simply would not be the same without them. 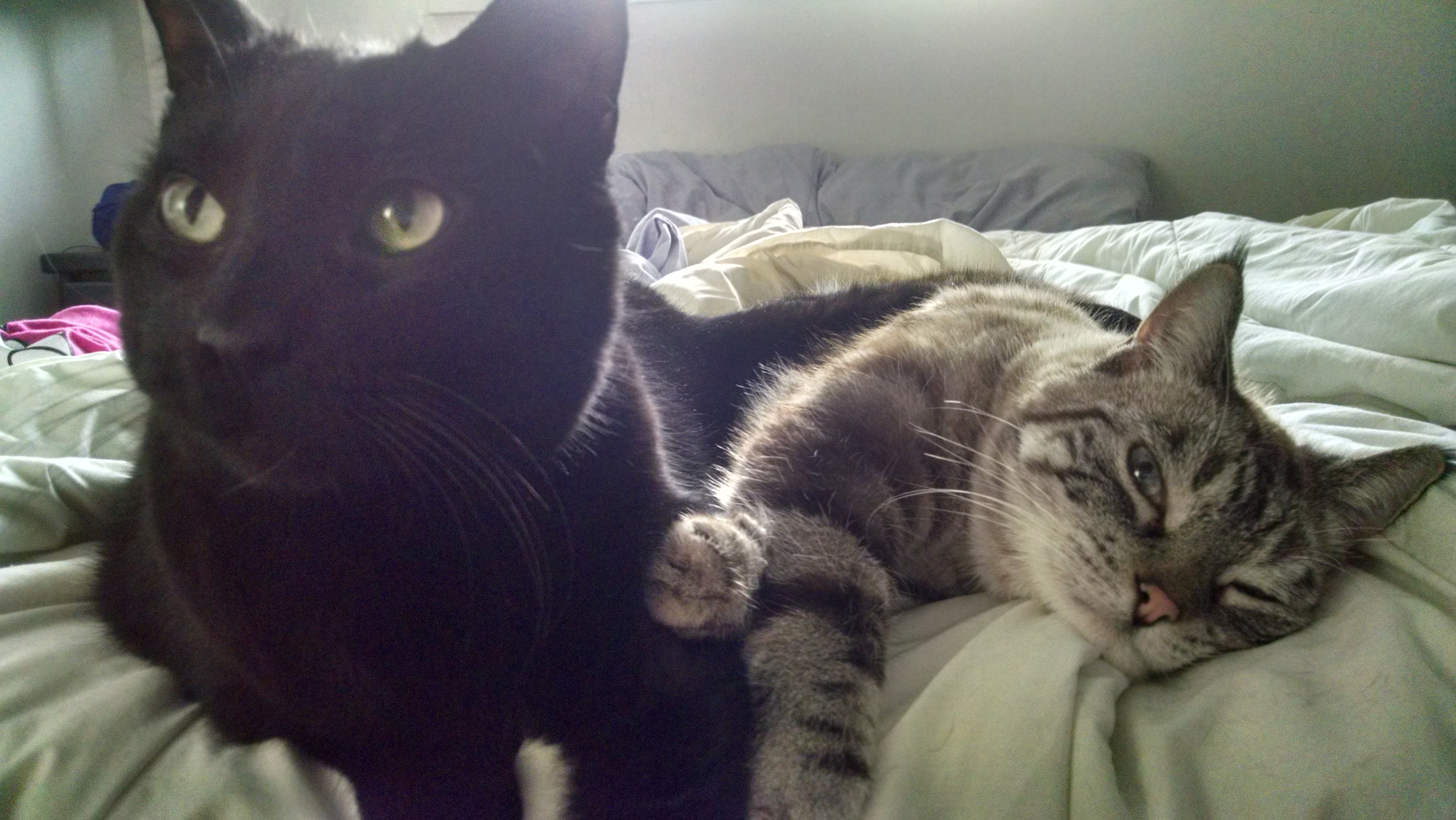 Cats Castle Cat Hotel is a cat boarding that specializes in both short term and long term cat boarding. Our cattery provides a luxurious alternative to pet sitting. Our facility is located in Oakville Ontario, just minutes off of the QEW. Our customers come from all over Toronto and the GTA, Milton, Hamilton, Mississauga, Burlington and more! – See more at: https://catscastle.ca/our-blog/#sthash.duaTWxtw.dpuf